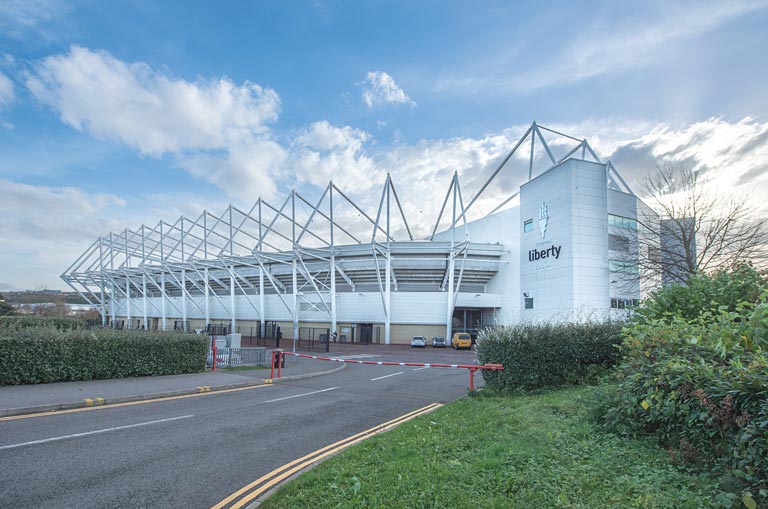 Following their promotion to the premier league back in 2011, Swansea City football club came to Ark with a specification for a fenced and gated area to aid with crowd control of the away fans on match day. There was a lot of discussion between ourselves the architects, Swansea council planning department and the football club, in order to find the right type of fencing to meet all the criteria set by each party.

Ark fencing recommended, their 868 Double Bar Security Fencing system its rigid construction makes it ideally suited to the application. The strength within the panels is achieved by sandwiching, a 6mm vertical wire between rows of twin 8mm horizontal wires spaced at 200mm intervals. This mesh configuration ensures that the panels offer a high resistance to vandalism.

After the plans and specifications had all been agreed, the fitting had been planned to take place over the next month. However the Saturday before work was due to commence the Cup Tie was drawn with local rivals Cardiff City. The two clubs having a very volatile history meant that fence had to be installed before the match day in 2 weeks!

This was no easy feat as the dig for the posts, which had to have holes 1 metre square by 1 metre deep, had to be dug through the tarmac top layer and then into the hard ground. The ground had iron ore deposits left over from the old industrial sites the stadium was built upon.

We used a Pan mixer for standard 4/1 mix for the posts as opposed to the usual postcrete, for cost effectiveness and ease of use.

Matches were still playing during the installation period. This meant the site having to be safe for the public and for nothing to be left that could be used as a ‘missile’, all 4 o’clock on match days.

Together with Spencer environmental who were supplying the plant machinery Ark put extra fitters on the job and working 12-14 hrs a day 7 days a week to ensure the job was completed in time.

The fenced and gated area is now affectionately called ‘The Cage’.